Beckton Sewage Treatment Works is one of five wastewater treatment plants in the Thames Water network in the United Kingdom and the largest treatment plant in Europe. Headquartered in the London borough of Newham, it serves 3.7 million people, mainly in north and east London. As part of a $309 million upgrade to the Beckton plant, Thames Water engaged general contractor GBM to upgrade the plant’s odor control capabilities. GBM looked for a solution that would cap and contain the odor from the facility’s 16 primary sedimentation tanks while operating seamlessly with the equipment inside each tank. The company found the solution in custom-engineered flat aluminum covers supplied by CST Covers. 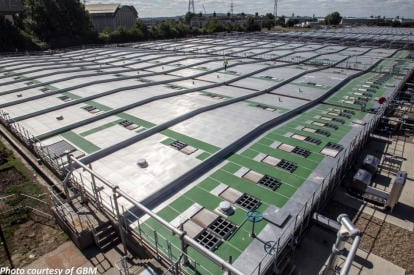 Investing in Improvements
Thames Water, the UK’s largest utility, provides water to 9 million people and wastewater services to 14 million in southern England, including parts of London. In 2010, the utility was authorized by its regulator, Water Services Regulation Authority (Ofwat) to invest $8.1 billion over five years in its water and wastewater network under a national Asset Management Plan, known as AMP 5. The plan includes a broad array of upgrades to improve service quality, control costs, and mitigate the company’s environmental footprint.

Thames Water is charged with controlling odor from the Beckton facility, which is surrounded by thousands of homes and businesses. Covering the sedimentation tanks, with a total area of 600,000 square feet, or the size of about 10 football fields, was a major challenge. CST reviewed the project specifications and worked with GBM and other contractors to deliver a cover for each of the 16 tanks. “Aluminum covers are environmentally benign, structurally robust and operator friendly, and they require little to no maintenance,” says John Delaney, Senior Vice President Sales with CST Covers.

Cutting Costs
Each sedimentation tank now has a low-profile aluminum cover with a slight pitch to allow water drainage. The low profile minimizes the air space under the covers, lowering the volume of air to be treated. Less air to treat means the utility can install a smaller odor control system at lower capital, operation and energy costs. The covers have a series of inspection hatches that operators can safely access from any point on the cover system. Operators can conduct routine maintenance without entering the tanks and being exposed to odorous air. The 150-pound modular panels can be easily removed by two operators. This will be beneficial during tank maintenance when small equipment needs to be set inside the tanks.

Working with the Machinery
While containing odors, the covers had to accommodate a system of scrapers inside each tank that gather settled sludge and push it to a collection tank. The scraper systems were to be suspended from the covers’ primary support beams.

The challenge was to incorporate the dynamic loads from the scraper system into the cover design without compromising the performance of the scrapers or the covers. The beams were spaced according to the scraper system’s requirement for supports at 6-meter (20-foot) intervals. The hanging support system design ensured that the scraper systems could be placed at the required elevations while providing some flexibility during installation.

The sludge trough at the end of each tank was the most challenging aspect of coordinating with the scrapers. The trough is sloped and has scraper tracks and a piston running through it. Since each primary support beam was vertically supported by a stainless steel column, there would be direct interference with the track and pistons. In response, CST developed an intricate triangulated support system that avoids the track and spreads the load from the covers into the sloped wall. “The design of the support columns in the trough area required input from GBM, the scraper equipment supplier, and CST,” says David Brahm, P.E., Lead Structural Engineer with CST. “We came up with a solution that satisfies the scraper system clearance envelope and maintains the structural integrity of the entire cover system.” The upgraded Beckton plant with its new odor control capability plays an important role in Thames Water’s performance, sustainability and customer satisfaction and serves as a model for treatment works throughout Europe.

Linkedin
Twitter
Print
E-mail
CST Industries, Inc., is the complete storage system provider for engineering and manufacturing professionals in thousands of different industries and applications throughout the world.